TFLhas a consultation on changes to the junction where CS7 on Clapham Road passes Union Road, with the Pheonix pub on the corner.

This junction has particular dangers with cars turning in to Union Road across people cycling and dashing across Clapham Road from Stirling Road into Union Road.

As TFL says:
In the last three years, there were 23 collisions at this junction, 18 of which were people cycling. (Data available up to 30 September 2018).

A number of issues have been identified with the current junction layout:

These “safer junctions” schemes are clearly about collision reduction rather than enabling more, and a wider range of people, cycling. They do little to improve subjective safety with people cycling still sharing space with motor traffic on busy roads. 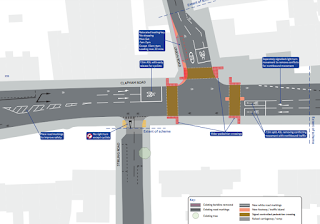 Our thoughts on this so far
Cycling in bus lanes is not the solution to mass cycling, but it does provide for cycling at a certain level of confidence. However, most of the bus lanes on the CS7 corridor are part time – outside operational hours cycling is dangerous and unpleasant due to fast motor traffic using bus lanes to undertake slower vehicles. This is a major factor in deterring non-commute utility cycling. The cheapest and most dramatic increase in subjective and objective safety on this route would be to make all bus lanes 24hours a day, 7 days a week

Specific comments on this junction

We support these changes with strong caveats – there is a high risk that new danger has been created here.

Our concerns with this proposal are set out below –

The separately controlled right turn to Union Road will exacerbate the issue of motor traffic merging into the left lane to continue straight on. This is precisely the situation at Kennington Park Road/Bragnanza Street where a separate ‘safer junctions’ scheme is creating a cycle bypass to avoid just this type of conflict.

Traffic currently using Stirling Road is likely to move Clitheroe Road leading to an increased volume of traffic turning right just at the point motor traffic is merging into the left lane in conflict with cycles. A very small ‘low traffic neighbourhood’ intervention would place a modal filter at the Kimberley Road/Grantham Road junction (this is on borough roads and would need Lambeth agreement)

There remains a left hook risk from Northbound traffic turning into Union Road. This risk occurs during the green phase – early release offers no safety benefit for cyclists here since any using the ASL would already be ahead of left turning vehicles and there is no merge on the far si

Read TFL’s proposals and respond to the consultation today.