On Saturday 31 October 2015 Lambeth Cyclists organised the latest in our series of rides looking at the London cityscape. On this ride we looked at South London buildings that have been featured in the Channel 4 television programme Grand Designs.

In stunning autumn weather Tessa Wright led an easy going ride to look at some of the buildings featured in the Channel 4 series Grand Designs in South London.

After extensive research Tessa sleuthed the mysterious locations of the glorious houses featured in the Channel 4 series and even more challenging, persuaded a couple of  owners of these dream homes to let a bunch of cyclists traipse round their houses.

We met at 1.30pm at Queen’s Road Peckham Station for a gentle ride through the leafy streets of
Peckham, Brixton and Clapham, ending at Brockwell Park at around 4pm, in time for a cup of tea. 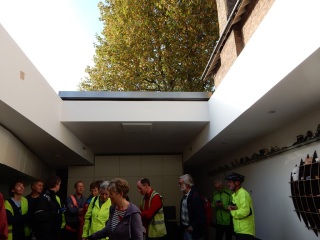 Featured on Grand Designs in 2005
Architect : Richard Paxton with Alex Flower and Jamie Falk of MOOARC
Cost: £40K for land and £170K for build · Restricted site – no windows to front or side so fabulous sliding glass roof designed by owner Monty Ravenscroft, of Moving Elements in Architecture 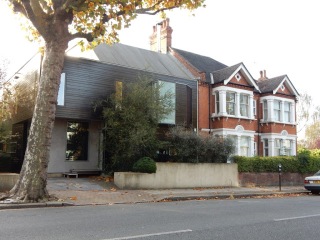 We then cycled by the home of Jenny Éclair and Geoff Powell, graphic designer

A pleasant cycle by Ruskin Park and the experimental car free part of Loughborough Junction brought us by POP Brixton. Designed by Carl Turner (also architect of the next property) it was created from low-cost shipping containers to support local community in jobs and business opportunities. 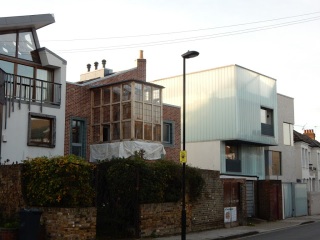 Featured on Grand Designs 2012
Designed by architect, Carl Turner for himself
Cost £550K
Minimalist materials and design
Slipped boxes to maximise light and space
Roof garden with solar panels – it is a low energy house

We finished up at Brockwell Park where we saw the additions made to a former rectory.

Thanks to Liz Harwood for writing the ride report and to the owners of 15½ Consort Road and Slip House for kindly allowing us to look round their homes. Photos: Liz Harwood.