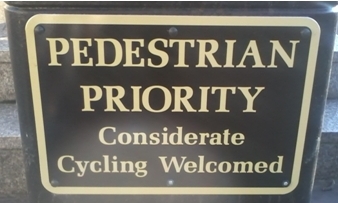 Following protests from Lambeth Cyclists and others from across Lambeth and London Lambeth Council has removed the signs that apparently banned cycling on the Southbank of the Thames between Albert Embankment and Gabriels Wharf. The new signs, as pictured  state “Pedestrian Priority Considerate Cycling Welcomed” – what we suggested as appropriate all along.

As outlined previously on this website the signs were put up as a result of pressure from local businesses and some residents over what they saw as inconsiderate cycling. It soon became clear that when the consequences were explained most users of the Southbank path were not in favour of banning cycling and the ban contradicted the borough’s and the Mayor of London’s stated aim of increasing the number of people cycling in London. Added to this was the need, if the signs were to become permanent, to obtain a traffic regulation order which would have required extensive consultation.

Thank you to everyone who wrote to their Councillors and MPs on this issue – these showed the depth of feeling on this issue which enabled us to work the Council to find ways of working around this issue. We will keep this issue under review and will seek to prevent any future ban being implemented. We hope to investigate further with Lambeth the possibility of making the parallel road route more cycle friendly so that cyclists have two options. According to a Freedom of Information request the original signs cost £2,600 to manufacture and install – an entirely unnecessary cost.