That is the message that we want to send out to all cyclists as we strive to avoid conflict on the paths of Lambeth’s parks.

The initiative came out of our May meeting where we were joined by PC Graham Alldus of the Lambeth Police Herne Hill Safer Neighbourhood Team. He came to talk to us about cycling in parks and how best to resolve the, at times, conflicting priorities of cyclists and pedestrians in parks. 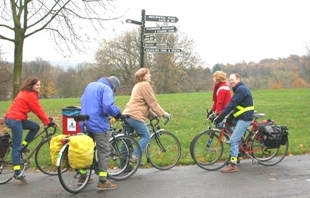 Here Clare Neely reflects on the issue…
“Cycling politics can be inflammatory at times, do we support segregated cycle lanes, do we always give way to pedestrians, is security of cycle parking or 20mph our key campaign issue, but park politics….

As I have discovered people are very very passionate about their local park and rightly so, parks are the lungs of our wonderful city. Park life is about strolling, chilling, and hanging out, all of which are difficult to do if someone is bearing down on you on two wheels at 20 mph determined to be the first into the office.

In parks the uneasy truce between cyclists and pedestrians which exists on the highway is blown apart, police officers attending parks meetings have the full force of people wanting to enjoy a walk in the park without having to look out for cyclists, and can be overenthusiastic in their dealings with people cycling in the park.

Cycling in Lambeth’s parks is probably here to stay, but note to self, next time I am cycling through Ruskin Park to catch the train from Denmark Hill I will leave a little time so I can cycle slowly, smile at my fellow park users and perhaps most importantly give us all a well earned breathing space.

Lambeth Cyclists are working with the Council, local park groups and the Police on what can be summarised as a chill in the park campaign. Over the summer and autumn we will be distributing leaflets on Clapham Common and Brockwell Park to remind cyclists to give priority to pedestrians.

We hope that the Police will also join us on these days to enforce road traffic law among car drivers especially with regard to features such as advanced stop lines which are routinely ignored by motorists and motor bike riders.”